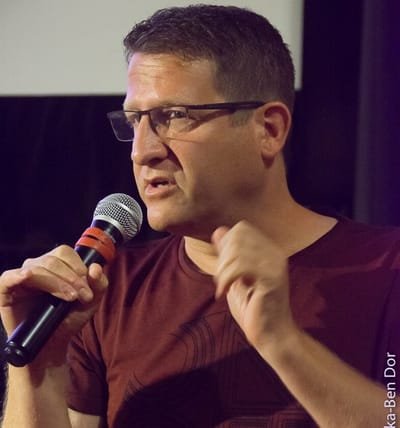 On the last day of my visit in Warsaw to which I came in order to present a film in a festival, a short tour was scheduled for the directors. Amongst the historical descriptions the guide revealed her personal knowledge of the stories of some of the local ghosts. I realized, at once, the price that has to be paid for the attempt to bury lives, memories and culture. The local ghosts caught me and since then – I'm there - meeting people, studying and investigating the phenomenon. After the war, machines turned the debris into dough from which bricks were made, that in turn, were used to build the new houses. The new tragedy is that no one bothered to tell the excited residents – who found a home for themselves after the war – what was buried underground and what materials were used to build their houses. Many of them were not concerned about it then, and some of them are not concerned about it now. But the ones that showed some sensitivity, especially the younger residents that join the neighborhood nowadays, find it difficult to accept the fact that they actually live in a huge cemetery. But almost in every place, someone lives on the ruins of a previous culture. A private person in a "primitive" society who feels the existence of ghosts would probably call a ghosts-expeller. The expeller would have probably mumbled a prayer, spread some incense and the ghosts would be gone in no time. But how do we deal with ghosts, real ones or metaphorical ones, in the modern, Western world? Is there even an option to expel the ghosts of history that bother us as communities? Should we expel them, or maybe, learn how to live in peace with them?